CHUV, CERN and THERYQ join forces for a world first in cancer radiotherapy

The Centre Hospitalier Universitaire Vaudois (CHUV) in Lausanne, Switzerland, the European Laboratory for Particle Physics (CERN) and THERYQ (ALCEN Group) have signed an agreement for the world-first development of a revolutionary FLASH radiotherapy device that will use very high energy electron (VHEE) radiation to treat cancers resistant to conventional treatments. The device, based on CERN technology, will be installed at CHUV. 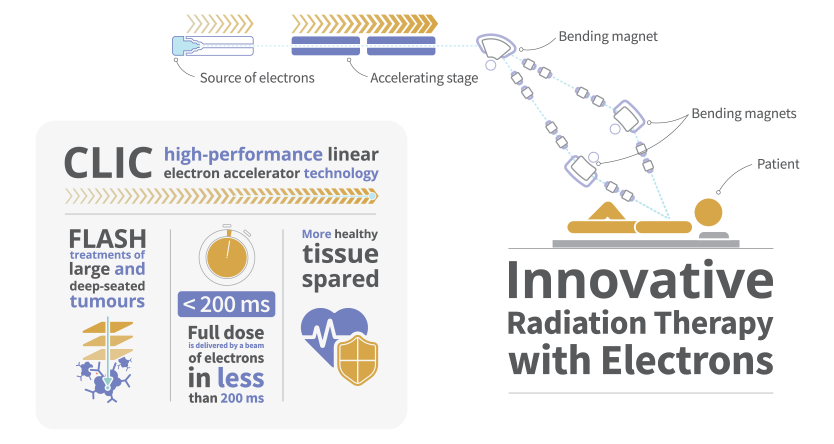 The program benefits from the prior financial support of the ISREC Foundation, in partnership with the Biltema Foundation which, through an exclusive donation of CHF 25.8 million, makes this project possible.

The tripartite agreement covers collaboration on the development, planning, regulatory compliance and construction of the world's first radiotherapy device using the FLASH technique with very high energy electrons. THERYQ, part of ALCEN's Healthcare Division, will produce this unique device that uses a compact linear accelerator based on CERN technology. A special bunker will be built at the CHUV to accommodate this technology.

The device is expected to be operational within two years. The first clinical trials are planned for 2025.

An advance donation of 25.8 million Swiss francs
This major development is part of the continuation of an innovative FLASH radiotherapy clinical transfer program initiated in 2020 between CERN and CHUV. The current phase is made possible by a prior funding from the ISREC Foundation, which announced in June 2021 that it would support the project with CHF 25.8 million through a donation from the Biltema Foundation. The ISREC and Biltema foundations have also supported the initial phases of the FLASH program with an initial contribution of CHF 1 million.

CHUV pioneers FLASH radiotherapy
Radiation therapy is one of the main forms of cancer treatment, along with chemotherapy, surgery and immunotherapy. Currently, one third of cancers are resistant to conventional radiotherapy. Research is focused on the development of a more effective radiotherapy that is better tolerated by patients.

It is in this context that the head of the Department of Radiation Oncology at CHUV, Professor Jean Bourhis and his team have pioneered the method called FLASH, which has produced impressive results in pre-clinical animal studies. With a view to clinical transfer, a pilot project launched in 2020 at CHUV saw the installation of a first prototype named FLASHKNiFE, manufactured by THERYQ, which allows the FLASH treatment of tumors up to 3 cm deep.

Today's milestone represents an important step forward. By integrating the innovative compact linear accelerator technology developed by CERN, the FLASHDEEP tool produced by THERYQ will use very high energy electron beams (VHEE) of 100 to 200 MeV, 10 to 20 times more powerful than those of FLASHKNiFE. This extra power will allow FLASH treatment of all types of cancers up to a depth of 20 cm.

CERN, from fundamental research to breakthrough technologies
CERN has responded to the challenge of producing a high dose of very high energy electrons in less than 100 milliseconds, required for FLASH radiotherapy, by designing a unique accelerator based on CLIC (Compact Linear Collider) technology. It will accelerate electrons to treat tumors up to 20 cm deep and will be compact enough to fit in a typical hospital campus.

VHEE FLASH technology has several advantages. High-energy electrons can be focused and oriented in a way that is almost impossible with X-rays, and radiotherapy devices based on CERN’s electron accelerator technology will be significantly more compact and less expensive than current proton-based therapy facilities.

THERYQ, a leading medical device company dedicated to FLASH radiotherapy
THERYQ, a spinoff of PMB-ALCEN, is an innovative medical technology company specializing in the design and production of radiotherapy machines incorporating linear accelerators.

From the first studies in 2013 on the FLASH effect to the first patient with skin cancer successfully treated in 2019, THERYQ has supported the development of FLASH therapy, particularly through a long-standing partnership with CHUV. The company has developed FLASHKNiFE, for external or intraoperative FLASH radiotherapy (10 MeV), treating superficial or shallow tumors (up to 3 cm).

FLASHDEEP, designed in collaboration with CHUV and CERN and produced by THERYQ, will be the first device capable of treating any type of solid tumor up to a depth of 20 cm using VHEE FLASH technology. This device has the potential to expand the use of radiotherapy in oncology and unlock new treatments for patients with cancer, as well as decrease treatment cost.

After delivering the first unit to CHUV, THERYQ will include FLASHDEEP in its own product range.

Mrs Rebecca Ruiz, State Councilor in charge of the Department of Health and Social Action, Canton of Vaud, said: “The Canton of Vaud decided to make cancer research a key focus in 2015.  Over the past seven years, it has invested over 172 million dollars in this field. The agreement signed today aligns itself perfectly with the intention of setting Lausanne as a center of excellence and scientific and clinical innovation at the international level, and enabling the population of Vaud to benefit from innovative treatments.”

Pr. Philippe Eckert, Director General of CHUV, said: “As a university hospital, the CHUV is fully committed to research. FLASH therapy embodies the spirit of innovation that drives us in this field. Eager to offer the most effective techniques to patients, we have joined forces with a world-class research center and a cutting-edge industrial partner to solve a medical, physical and technical problem and find innovative solutions to fight cancer.”

Pr. Jean Bourhis, Head of the Department of Radiation Oncology at CHUV, said: "FLASH technology represents real hope for increasing the potential for curing cancers with radiation therapy, and the current stage will enable first crucial clinical developments in this area."

Mike Lamont, CERN Director for Accelerators and Technology, said: “At CERN, part of our mission is knowledge transfer and we actively work to find applications of our breakthroughs outside the domain of particle physics for the benefit of society at large. This collaboration demonstrates how CERN technologies and expertise combined with strong partnerships with experts in other fields can really make an impact.”

Walter Wuensch, Project leader at CERN, said: “A clinical FLASH facility has been developed, with which large, deep-seated tumors are treated using high-energy electrons. The facility is based on accelerator technology developed for CLIC (Compact Linear Collider) to create a high performance and compact facility that can easily fit on a typical hospital campus”.

Ludovic Le Meunier, CEO of THERYQ, said: “THERYQ is honored to contribute its expertise and agility to this project, alongside CHUV and CERN. FLASHDEEP marks a therapeutic revolution, with the potential to significantly increase the number of patients living longer and cancer-free lives.”

Pr. Pierre-Marie Glauser, Chairman, the ISREC Foundation, said : "The ISREC Foundation is pleased to contribute to the development of FLASH technology, and has done so since 2016. This innovative and interdisciplinary project bringing together biologists, physicists and physicians in close collaboration fits perfectly with the Foundation's objectives of supporting research in translational oncology. Today, we are delighted to see the realization of this decisive step that will take the FLASH program to a new level of efficiency and implementation."

About CERN:
CERN, the European Organization for Nuclear Research, is one of the world's leading laboratories for particle physics. The Organization is located on the French-Swiss border, with its headquarters in Geneva. Its Member States are: Austria, Belgium, Bulgaria, Czech Republic, Denmark, Finland, France, Germany, Greece, Hungary, Israel, Italy, Netherlands, Norway, Poland, Portugal, Romania, Serbia, Slovakia, Spain, Sweden, Switzerland and the United Kingdom. Cyprus, Estonia and Slovenia are Associate Member States in the pre-stage to Membership. Croatia, India, Latvia, Lithuania, Pakistan, Türkiye and Ukraine are Associate Member States. Japan and the United States of America currently have Observer status, as do the European Union and UNESCO. The Observer status of the Russian Federation and of JINR is suspended in accordance with the CERN Council Resolutions of 8 March 2022 and 25 March 2022, respectively.

About THERYQ:
Located in the south of France and spin-off of PMB-ALCEN, THERYQ is an innovative medical technology company specializing in particle accelerators and radiotherapy systems. The company masters and provides essential expertise on project management, R&D, industrialization and manufacturing. THERYQ is part of ALCEN’s Healthcare branch.