The ESMO 2021 Award for Translational Research recognizes the work of the Department of Oncology UNIL CHUV and the Ludwig Institute for Cancer Research Lausanne by rewarding its director, Prof. George Coukos 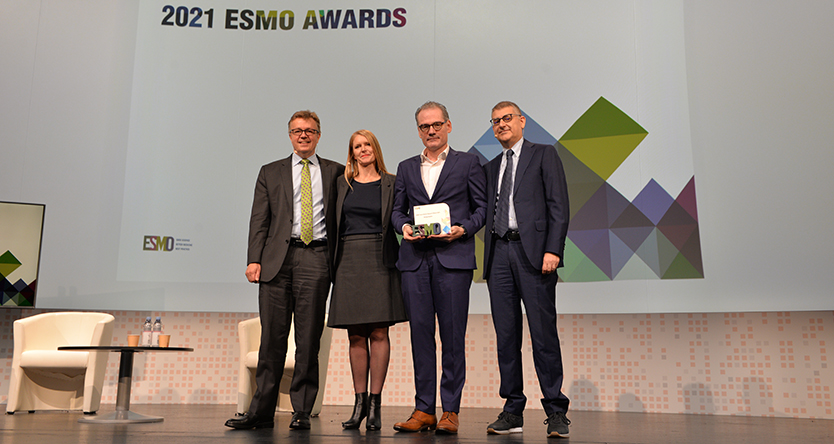 The Human Integrated Tumor Immunology Discovery Engine (hi-TIDe), a multidisciplinary research group that Prof. Coukos created within the Department of Oncology UNIL CHUV and the Ludwig Institute Lausanne, is now developing and testing new and rational approaches to T cell therapy. An active programme is underway to apply T-cell based concepts within clinic trials. A phase I study with tumour-infiltrating lymphocytes has recently been completed and a new trial with neoantigen-enriched TILs was initiated this spring.

Major upheaval
George Coukos' first breakthrough contribution to immunotherapy was the discovery of a spontaneous antitumour immune response in ovarian cancer, overturning the prevailing dogma that only a few tumour types (e.g. melanoma or kidney cancer) are immunogenic. This observation reignited the study of anti-tumour immunity, with the subsequent validation of Pr Coukos' findings not only in ovarian cancer, but in all solid tumours, leading to the aggressive pursuit of immune checkpoint blockade as a means of invigorating endogenous anti-tumour immunity. Since then, the laboratory has described the mechanisms of immune recognition, including neoantigens, but also dysfunctions of the tumour microenvironment - including, among these, the regulatory function of tumour vasculature on immune attack.

While at Penn (University of Pennsylvania), George Coukos was the first to envisage the new unifying hypothesis that immune tolerance and tumour angiogenesis as two facets of the same biological programme in the tumour microenvironment, jointly aimed at promoting tumour progression. This programme is executed by the same types of immune cells, which perform both tasks simultaneously, and can be reprogrammed and committed to either tolerogenic/proangiogenic or angiostatic/immune rejection phenotypes, depending on the overall signals of the tumour microenvironment. The laboratory described the proangiogenic role of T regulatory cells (Treg) and specialised tumour monocytes. Pr Coukos was also the first to propose the novel notion of the tumour endothelial barrier, i.e. that the vascular system actively controls the localisation of T cells in tumours by precisely regulated molecular mechanisms, largely driven by proangiogenic and paracrine inflammatory mediators.

Success shown in several cancer types
Again, this discovery overturned the established dogma that T cells diffuse into tumours passively due to capillary leakage. Different molecular mechanisms have been identified, offering new therapeutic targets for cancer immunotherapy. Several clinical trials are currently underway, led by Pr Coukos’ teams and others, to test the combination of anti-angiogenesis drugs with immunotherapy. Today, the combination therapies that target both angiogenesis and immune cells proposed by Pr Coukos have been successfully tested and approved by medical regulatory bodies for liver, lung and kidney cancers.

George Coukos has also played an active role in translating laboratory results to the clinic, through early phase clinical trials. Significant efforts have equally been undertaken by his teams to develop an autologous dendritic cell vaccine and adoptive T-cell therapy with vaccine-primed autologous T-cells to mobilise anti-tumour immunity in ovarian cancer.