An Inserm team at the Lille Neuroscience & Cognition laboratory (Inserm/Université de Lille, Lille University Hospital) has joined forces with its counterparts at Lausanne University Hospital (CHUV) to test the efficacy of GnRH injection therapy in order to improve the cognitive functions of a small group of patients with Down syndrome. First the scientists revealed a dysfunction of the GnRH neurons in an animal model of Down syndrome and its impacts on the cognitive function impairment associated with the condition. Then a pilot study testing GnRH pulsatile injection therapy was conducted in seven patients. The results were promising : the therapy led to improved cognitive function and brain connectivity. This study has been published in Science. 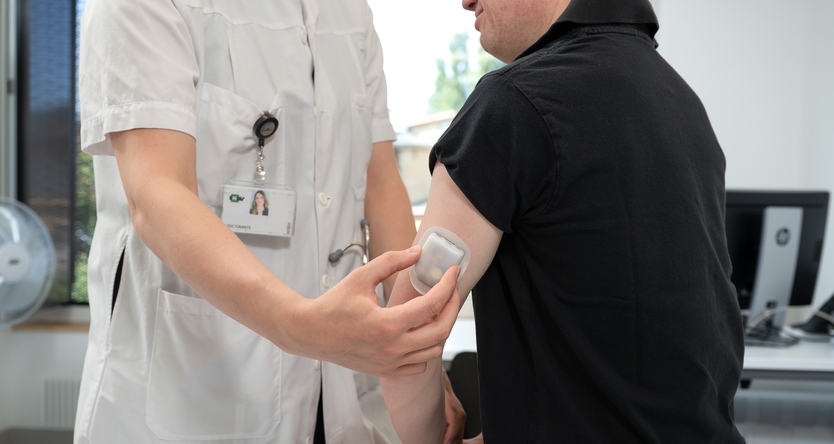 Here, the pump, which is similar in aspect to a band aid, is being placed on a patient's arm. This medical device allows for a pulsatile delivery of GnRH, under the skin. © 2022 CHUV Eric Deroze

Down syndrome, also known as trisomy 21, affects around one in 800 births and results in a variety of clinical manifestations, including decline in cognitive capacity. With age, 77% of people with the condition experience symptoms similar to those of Alzheimer's disease. Gradual loss of the ability to smell, typical of neurodegenerative diseases, is also commonly encountered from the prepubertal period, with potential sexual maturation deficits occurring in men.

GnRH-secreting neuron dysfunction identified in Down syndrome
Recent discoveries have suggested that the neurons expressing gonadotropin-releasing hormone (GnRH), which is known for regulating reproduction via the hypothalamus, could also act on other brain regions with a potential role in other functions, such as cognition.

With this idea in mind, the Lille Neuroscience & Cognition laboratory team led by Inserm Research Director Vincent Prévot studied the mechanism which regulates GnRH in mouse models of Down syndrome.

The laboratory demonstrated that five strands of microRNA regulating the production of this hormone - which are found on chromosome 21 – are dysfunctional. This supernumerary chromosome then leads to abnormalities in the neurons that secrete GnRH. These findings were confirmed at both genetic and cellular levels. The Inserm scientists were able to demonstrate that the progressive cognitive and olfactory deficiencies seen in the mice were closely linked to dysfunctional GnRH secretion.

These findings in mice were discussed with Nelly Pitteloud, professor at the Faculty of Biology and Medicine of the University of Lausanne and head of the Endocrinology, Diabetology, and Metabolism Department at CHUV. Her research focuses on congenital GnRH deficiency, a rare disease which manifests by the absence of spontaneous puberty. These patients are given pulsatile GnRH therapy in order to reproduce the natural pulsatile rhythm of this hormone’s secretion, in order to induce puberty.

The researchers therefore decided to test the efficacy of pulsatile GnRH therapy on cognitive and olfactory deficits in trisomic mice, following a protocol identical to that used in humans. After 15 days, the team was able to demonstrate the restoration of olfactory and cognitive functions in mice.

Pulsatile GnRH therapy improves cognitive function and neural connectivity in a small patient group
The next stage for the scientists and doctors involved a pilot clinical trial in patients, adressed by Prof. Ariane Giacobino in charge of the Trisomy 21 consultation at the Geneva University Hospital, to evaluate the effects of this treatment. Seven men with Down syndrome, between 20 and 50 years of age, received one subcutaneous dose of GnRH every two hours for 6 months via a pump placed on the arm. Cognition and olfactory tests as well as MRI exams were performed before and after the treatment.

From the clinical viewpoint, cognitive performance increased in 6 of the 7 patients with better three-dimensional representation, better understanding of instructions, improved reasoning, attention, and episodic memory. However, the treatment had no impact on the ability to smell. This improvement in cognitive functions was associated with changes in functional connectivity as observed by brain imaging conducted by the CHUV Department of Clinical Neurosciences.

These data suggest that the treatment acts on the brain by strengthening the communication between certain regions of the cortex. "Maintaining the GnRH system appears to play a key role in brain maturation and cognitive functions," explains Prévot. "In Down syndrome, pulsatile GnRH therapy is looking promising, especially as it is an existing treatment with no significant side effects," adds Pitteloud.

These promising findings now justify the launch of a larger study – with the inclusion of women – to confirm the efficacy of this treatment in people with Down syndrome, but also for other neurodegenerative conditions such as Alzheimer's disease.

About Inserm
Founded in 1964, Inserm is a public scientific and technological institute which operates under the joint authority of the French Ministries of Health and Research. The institute is dedicated to biomedical research and human health, and is involved in the entire range of activities from the laboratory to the patient’s bedside. It also partners with the most prestigious research institutions in the world that are committed to scientific challenges and progress in these fields.